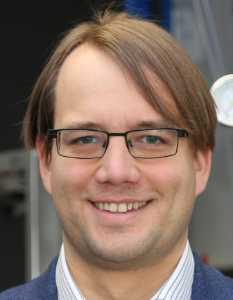 Robert Kourist is professor for Molecular Biotechnology at Graz University of Technology and head of the institute of the same name. He studied Biochemistry from 2000 to 2006 at the Universities of Greifswald (Germany) and Oviedo (Spain). After his Ph.D. thesis under the supervision of Prof. Uwe Bornscheuer in Greifswald (2006–2008), he went for a postdoctoral stay at the Keio University in Yokohama, Japan. He was Junior Professor for Microbial Biotechnology at the Ruhr-University Bochum from 2012 to 2016, when he received his appointment for his current position at the TU Graz. Robert Kourist is head of the Area Biotransformations at the Austrian Centre of Industrial Biotechnology. He is speaker of the FWF doc.funds CATALOX and has been coordinator of the Marie Curie-Sklodowska ITNs PhotoBioCat and BIOCASCADES.

By continuing to browse the site, you agree to our use of cookies. Further Information